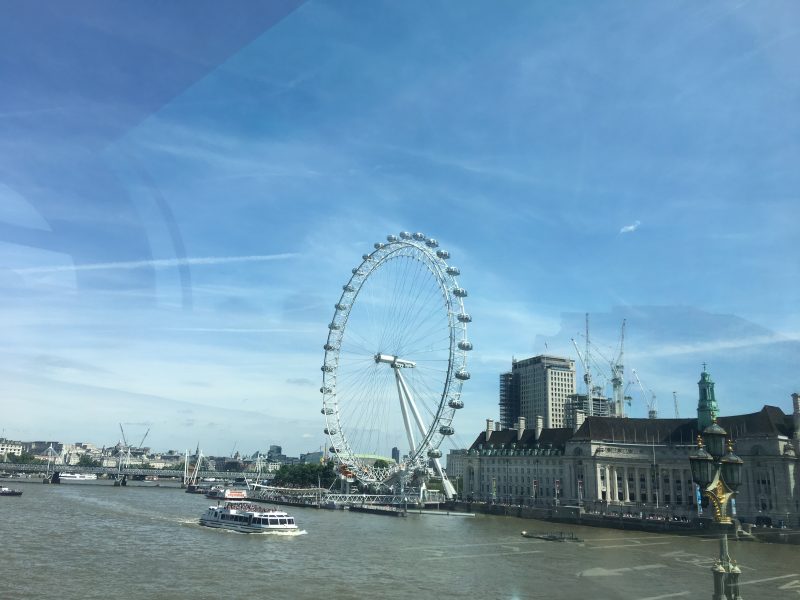 Taking it easy and exploring the city or a strict busy schedule?  This post will allow you to explore London with kids at your own pace.  When I went to London for the first time, as a child, my family had a packed agenda and we pretty much covered all major sites and attractions over the course of a week.  Therefore, I had planned a slightly less packed schedule though an all encompassing visit with our own kids.

Our trip was in early July and we had 6 nights in town.  Despite my sister and I were much more easygoing kids than ours, I found it overwhelming to even attempt to cover most tourist spots in London in one visit.  First, because there’re probably more to see and do in London than in most major cities.  Secondly because the traffic is much worse than it used to be.  To top it off, it was an unseasonably hot week and there were many marathons, parades, concerts and other events taking place in town and closing down huge parts of the city or at the very least diverting traffic for several blocks.  Finally, all the amazing attractions and sites in London are very spread apart so it’s nearly impossible to cover it all in a couple of days.  I also found that by running back and forth across town in a cab you miss a lot of the neighborhood experiences.  Therefore, in a future visit I will limit our exploration to only a few neighborhoods that we can explore well by foot and only then move on to another section of town.

I’m a big fan of hop on/hop off buses when visiting a city for the first time in order to have an overview of the layout, identify what’s there to see and do, get some historical background… However, we learnt the hard way that London is not equipped or used to hot summer days so the hop on hop off bus was way too hot up top while there was no A/C in the main level and no windows, only narrow vents so it was roasting downstairs as well.  As a result, sadly we didn’t last for more than an hour each day on the bus.  The bus was a major piece of my London exploration with the kids so without the bus we didn’t venture as far as we had expected.  So I would still recommend it except on the rare hot summer days.  Our London highlights for kids were: Matilda, the Musical, the Science and Natural History Museums, Natural History Museum (be ready for long wait times), Egyptian Rooms at the British Museum, high tea at Sketch, Hamley’s Toy Store (a very short walk from Sketch) and the amazing parks scattered throughout town.  Even though we didn’t spend much time out in the parks I would strongly recommend a visit to one or more of the parks below:

Probably one of the finest parks in London and great for visitors of all ages.  The park has a recently refurbished playground (perfect for toddlers to 7 year olds), wide variety of resident birds, and a cafe with varied menu offerings.

Located next door to Kensington Palace, this playground has many areas inspired by the stories of Peter Pan (J M Barrie was a nearby resident).  There are teepees, a giant pirate ship, a ‘sandy beach’, giant musical instruments, and extensive greenery which make it the perfect hiding place to create your own adventure.  This playground is recommended for toddlers to 8 year olds.

The Serpentine Lido is a very popular destination during summertime in London so it can get very packed.  However for those who do not fear crowds or who are visiting off peak times, this park has a great lawn, sandpit, climbing frame and paddling pool.  Please note that there is a small charge for entry.

One of London’s most exclusive parks offers a wide range of facilities for football, golf, cricket, netball and often hosts a variety of children’s activities through the Kensington & Chelsea’s Ecology Centre which is also located in the park.  The adventure playground has climbing structures, zip line, giant seesaw, and a small climbing wall.

This is the perfect outing for older kids (10 and over).  It’s a fantastic treetop fun adventure situated in the heart of London on the South bank of the River Thames, opposite Chelsea. Some of the activities included are: zigzag bridge, stepping stones, Tibetan bridge, zip line and much more.  The surrounding park is a great location for a nice relaxing walk and picnic after your treetop adventure.

Have fun exploring London and please let me know what were your favorite family attractions and restaurants!

Out of this world pampering at The Spa #bocaratonr

Watermelon salad with goat's cheese and the spicie